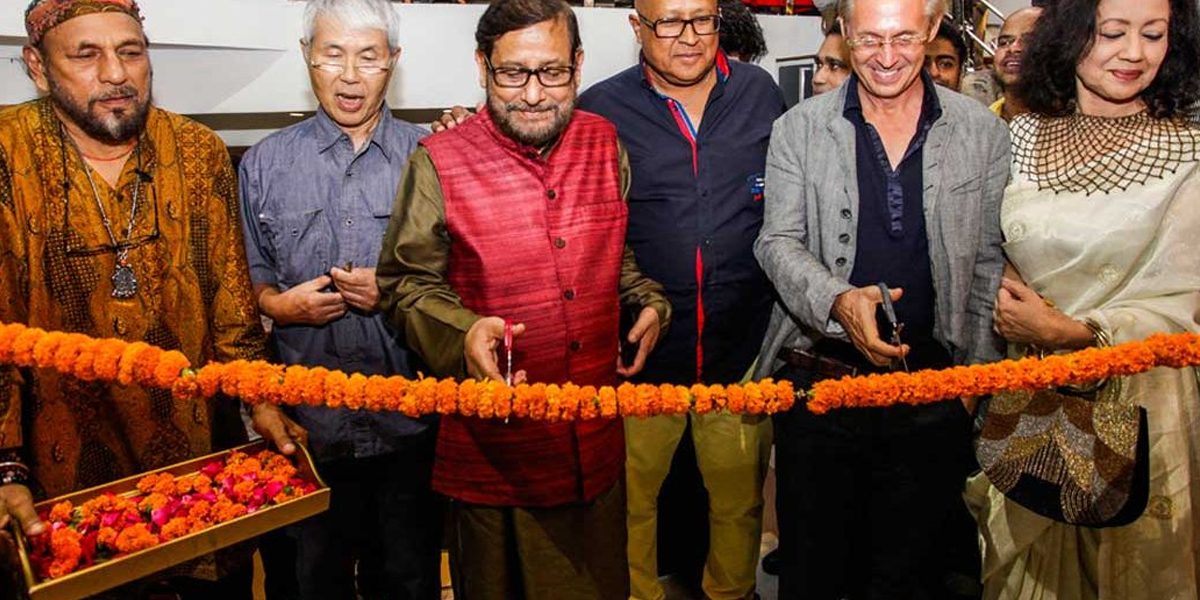 Dhaka, September 4 (UNB) – The country’s premier printmaking studio, Cosmos-Atelier71, was formally re-launched on Tuesday after renovation works, in an effort to make it an international standard art studio.

Chairman of Cosmos-Atelier71 Enayetullah Khan welcomed the foreign dignitaries from the Asian Art Biennale and thanked everyone for attending the inauguration ceremony of the studio.

He said that the studio is an excellent place to collaborate and share knowledge between artists.

Asaduzzaman Noor thanked everyone for making this event a success and wished to see quality outputs from the studio in the next Biennale.

Artist Jogen Chowdhury thanked Enayetullah Khan and those behind Cosmos-Atelier71 for setting up a studio aiming to elevate the passion of artists rather than keeping it for commercial purposes.

In ten years, he anticipated great outputs from the studio and stressed that the society needs more people like the studio authorities for the greater good.

Biennale observer and Professor Emeritus of Tokyo University Tetsuya Noda heard previously only heard about the studio but was amazed to see it for the first time in person.

Fellow observer and art critic Dr Marek Bartelik said that the studio will remain as a standout achievement for printmaking in Bangladesh in the years to come.

Kalidas Karmakar, who is in charge of Cosmos-Atelier71, urged all artists to try out the studio as it will help them attain better knowledge about printmaking and other genres of art.

The event was attended by eminent Bangladeshi artists such as Syed Jahangir, Biren Shome, Alakesh Ghosh, Abdus Shakoor Shah, as well as international artists whose works are currently exhibiting at the Asian Art Biennale.

They were all later taken on a tour throughout the revamped studio, to have a look at the upgraded facilities and equipments Cosmos-Atelier71 has to offer to artists.

With the objective of upholding international standards, Cosmos Atelier71 is an integral part of the artistic vision Cosmos Group seeks to serve, in the form of a printmaking studio housing state-of-the-art equipment that is extremely rare in Bangladesh.

It aims to break new grounds by acting as an incubator for the emergence of the graphical arts in Bangladesh.

They also offer residency programme for leading artists from around the world where they can experiment with alternative methods and materials.

This combination of residency programme, Gallery Cosmos and their printmaking facilities makes Cosmos Atelier71 one of the most desirable destinations for contemporary arts in South Asia.

‘Sheikh Hasina: On the Right Side of History’ exhibition inaugurated in Dhaka
December 23, 2020