‘Sheikh Hasina: On the Right Side of History’ exhibition inaugurated in Dhaka 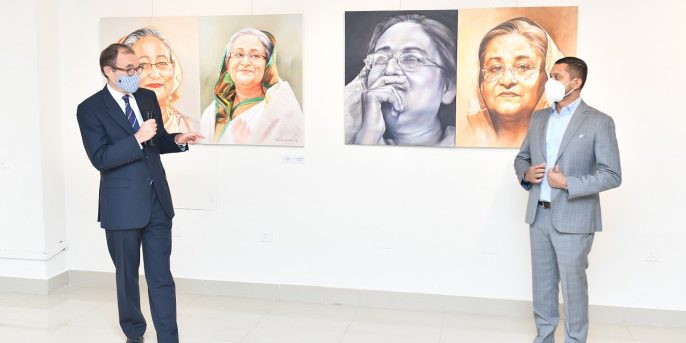 The exhibition is an outcome of a previously held art camp where 21 artists participated portraying PM’s life and achievements.

A two-month long exhibition on Prime Minister Sheikh Hasina has been inaugurated at Cosmos Centre at Dhaka on Saturday.

The exhibition titled “Sheikh Hasina: On the Right Side of History” was inaugurated by British High Commissioner to Bangladesh Robert Chatterton Dickson and Turkish Ambassador Mustafa Osman Turan.

The exhibition is an outcome of a previously held art camp where 21 artists participated portraying PM’s life and achievements.

Speaking on the occasion, the British High Commissioner said, “Prime Minister Sheikh Hasina is a remarkable leader and the exhibition shows her incredible range of emotions and determination captured in an array of artworks.”

Ambassador Mustafa Turan said, “Seeing all these paintings, I’m very impressed. I’ve not met her yet. I’m sure when I’ll meet her in person, I’ll appreciate this initiative,” said the ambassador, thanking the Cosmos Foundation for bringing them together to celebrate life and achievements of Prime Minister Sheikh Hasina.

Deputy Managing Director of Cosmos Group Masud Jamil Khan said, “Each of the artwork here is unique. He also said that art may not be essential to day-to-day survival but it would be essential in the long run to the survival of society and culture.”

The exhibition will remain open till February 12, 2021, and 20 visitors are allowed at one time. Visitors are strictly advised to wear masks while visiting the exhibition and maintain other health etiquettes.

Category: Atelier '71By adminDecember 23, 2020Leave a comment
Tags: Atelier '71Cosmos CentreCosmos FoundationExhibitionSheikh HasinaSheikh Hasina: On the Right Side of History